Not one house will be able to completely be immune to insects. Cleaning every day is not enough unless you do it every hour. You may be able to shoo them away for a period of time, but they will come back.

The permanent way to get rid of those pests it to just kill them. If you do not, then they will just continue to come back and grow in numbers. Imagine if your house is full of creepy crawlies that is a thing of nightmares. 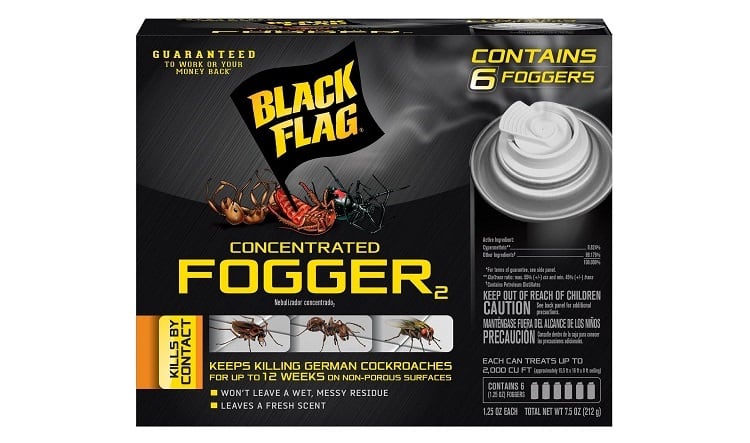 If you want to get rid of spiders, ants, roaches, mosquitoes, and many other insects, try the Black Flag HG-11079. This indoor fogger will not just kill those pesky bugs but will also leave a fresh scent.

Unlike electric foggers and propane foggers, this is super cheap. One pack contains six foggers and only costs less than $12. This is an easy, straightforward solution for pest control in your house.

A pack of Black Flag HG-11079 contains six canisters of foggers. Each canister is approximately 1.25 ounces. You will have plenty of supply to kill most of the bugs and have some leftover for future uses.

The active ingredient in this product that makes it effective is cypermethrin. It is widely used for commercial and domestic insecticides. It acts as a neurotoxin to insects poisoning them and destroying their nerve tissues.

The fogger’s effect on the bugs can last up to 12 weeks. They are ideal for indoor use because exposure to sunlight, water, and oxygen makes them decompose fast.

The fogger can penetrate cracks and crevices where the bugs live and breed. So, before they increase in numbers that you would not be able to control, use the spray to prevent it from happening.

Each canister of the Black Flag HG-11079 can cover 2,000 cubic feet that is approximately 15.5 ft. x 16 ft. x 8 ft. ceiling. That is enough to cover one small-sized room. If you will only be using for target areas, this is more than enough.

No Residue Left Behind

This product is toxic and is highly flammable. Before spraying this in your rooms, make sure that all furniture like cabinets, cupboards, even doors, and others are open. Remove everything that has to do with food and cover waxed and plastic surfaces.

Also, cover aquariums or indoor ponds if you have those. Remove the fish, cover, and then turn off their systems. Cover the kitchen area especially surfaces where you place food.

Once you press the tab and it locks in position, set it down on a newspaper and leave immediately. Let the fogger do its job for about two hours. Make sure that you do not leave it in a small confined space because it may explode.

After two hours of treatment, open all windows and doors and let it air out for two more hours. This will give you time to allow the fumes to dissipate completely.

Do not allow anyone, humans or animals, to go in while treatment is still ongoing. If your pet is suffering from fleas, do not use it directly on your pet. If you will be going out while the treatment is going on, leave a sign to warn people.

Black Flag is an effective way to kill most bugs and insects in your home. If you have seen those pests at an alarmingly large number, it is time for action. Control the increase of pests for a healthier and more comfortable way of living.

This fogger is very cheap compared to thermal and non-thermal foggers. It will leave no mess behind, well except for the corpses of the dead bugs inside, which will be easy enough to sweep away. When you do decide to use this, please remember all the cautions to avoid unwanted accidents.