This Blue Rhino SkeeterVac review will suggest an outdoor solution to an all too familiar problem, the dreaded mosquito. If you’re reading this article, then you’re probably well acquainted with this pesky bugger, who likes to make an appearance as the cold of winter passes to make way for a warmer, brighter spring.

Then, once summer comes, your relationship progresses from the odd nibble to an absolute living nightmare.

Of course, mosquitoes aren’t just a problem because they’re annoying. Mosquitoes can be dangerous insects and carriers of serious diseases, such as malaria, yellow fever, and encephalitis. Here’s a link to a super insightful post we’ve got up on our website. It’ll teach you the most effective way to prevent mosquito-borne diseases.

What is the Blue Rhino SkeeterVac?

In this section, we’re going to be focusing on these SkeeterVacs generally while highlighting their nuances. The SkeeterVac is a propane mosquito and bug trap produced by Blue Rhino. The two most popular brand models are SV3100 and SV5100. Both models act as traps that attract mosquitoes, along with other insects, so that they can be captured and killed.

Now, you may be wondering where the propane fits into all of this? Well, the propane burns to generate electricity that makes a fan inside the SkeeterVac begin to turn. As the fan spins, it creates suction while also emitting CO2 and octanol, which allows it to disorient, capture, and kill mosquitoes (plus other insects).

There is also sticky paper similar to what you’ll have seen many times on kitchen windows, to boost the functionality of the trap. This mosquito capturing system is known as the Vac&Tac by Blue Rhino.

Would I Buy a SkeeterVac from Blue Rhino?

Yes, I would because Blue Rhino is a reputable brand and its SkeeterVacs, particularly the SV5100 (newest model), are in demand. I like the fact that Blue Rhino’s SkeeterVacs are cordless and easy to assemble.

Pricewise, they’re generally competitive in terms of both functionality and cost. As a rule of thumb, propane-powered SkeeterVacs aren’t overly reliable, but if I were going to buy one, I wouldn’t rule out one of Blue Rhino’s products.

Is the SkeeterVac by Blue Rhino the Best Propane Mosquito Trap

The Blue Rhino SkeeterVac is NOT the best Propane Mosquito Trap out there. Is it good? Yes. Is it one of the most sought after brands out there? Absolutely. But, it’s got several problems with central features as reported by online customers.

Moreover, there is no one “best” SkeeterVac, just like there is no “best” car. We should buy our Skeetervacs the same way we buy our vehicles, based on what we need and want.

Do we need our SkeeterVac to cover a large garden or a small one? If it’s a large garden, then I need a SkeeterVac that’s effective over at least 1 acre (6.4m). Is my SkeeterVac going on road trips? If so, then I’ll need a propane-powered SkeeterVac, which holds a large amount of propane fuel. I don’t want to carry any more dead weight than I must, so I’m going to choose a lightweight option.

If we’re trying to buy the “best” SkeeterVac for us as individuals, then these are the types of questions and answers we need to think up. Now, let’s take a look at some of the drawbacks associated with Blue Rhino’s SkeeterVacs.

Before you leave thinking these SkeeterVacs are rubbish, there have been many success stories posted online. Some reviewers claim the products are amazing and super effective when it comes to trapping insects, not least mosquitoes. So, you need to decide for yourself if this product is for you.

I suspect human error may be at play here in many cases where the product didn’t work. So, Be mindful of the best place to put your SkeeterVac. Mosquitoes tend to hide out in cool, damp areas like under your home or hedges. These areas are where you should place your SkeeterVac to ensure they eliminate as many insects as possible.

The SkeeterVacs from Blue Rhino are cordless, which makes them very mobile and perfect for camping trips. I, along with other online reviewers, quite like this aspect of Blue Rhino’s product.

The sticky flypaper doesn’t just catch insects. Many people have reported it as dangerous to other wildlife such as birds. Personally, this isn’t something I’d be ok with at all. I can understand that birds most likely become trapped when they attempt to eat flies and insects stuck to the SkeeterVac’s sticky surface.

But, that does not excuse Blue Rhino. The problem should have been picked up on in testing and fixed accordingly. The fact Blue Rhino failed to do so, puts a dampener on the professionalism of what is a big name brand.

Additionally, other online users reported Blue Rhino’s SkeeterVacs failing to catch any mosquitoes, only flies. Again, a lot of people are purchasing Blue Rhino’s propane mosquito catchers on the basis that it’ll, well, you know, catch mosquitoes. So, those reports are quite worrying, if they’re true.

This section is just going to add to my quick review of Blue Rhino’s SkeeterVacs in the last subheading.

Who Should Buy a Blue Rhino SkeeterVac

Naturally, Blue Rhino’s SkeeterVacs are for anyone with a mosquito problem. But, the products can also kill other insects such as flies and midges. So, don’t rule them out if those guys are bothering you.

For homeowners or clubs who spend time outside enjoying barbecues or social events, this is a great option. It’s best used beside a picnic table or garden umbrella in your back yard swamped by mosquitoes from a den.

Obviously, it’s not very useful outside of its stated effective range, or if you fail to place it in areas where mosquitoes tend to thrive. If you’ve got a severe mosquito problem, then you should seriously consider an alternative like habitat control. This method can work by supporting natural predators like bats or mosquitofish (if you’re beside a lake!), but never introduce an unnatural predator into your area.

If you’re looking for a less extreme approach, follow the advice from the Centers for Disease Control and Prevention. Again, the SkeeterVac is pretty much for someone who’s looking for a quick, effective solution in a reasonably small area. For health and safety reasons, you should never go and use this product indoors. 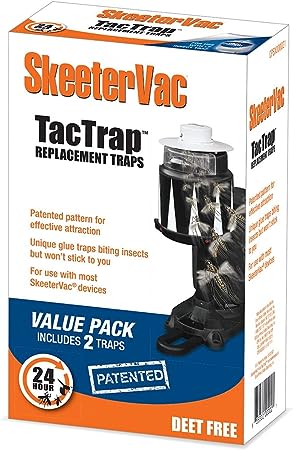 Say goodbye to pesky mosquitoes and flies! This box comes with two TacTrap replacements to use with your SkeeterVac. Sit back and let these mosquito traps protect your garden, patio, and outdoor space.

These Mosquito exterminators are relatively similar in terms of functionality. So, it’s difficult to understand the pretty massive price gap between the pair.

The SV5100 is effective over 1.2 acres, while the SV3100 only works within an acre. Of course, these coverage distances only account for ideal weather conditions. So, keep that in mind should you decide to purchase one of these two products. The SV5100 is the newer model.

As such, it has undergone some changes to its design. For instance, this propane bug trap comes with wheels and an increased capacity to emit carbon dioxide. The SV5100 emits 35,000 cc/hour, while the SV3100 only emits 27,000 cc/hour.

So, clearly, the newer model boasts a superior carbon dioxide rating. Both insect traps rely on propane running through a catalytic converter to generate energy. This energy is used to turn a fan that blows out CO2, heat, moisture, and octanol. Octenol is an attractant you can buy to increase your SkeeterVac’s performance.

Both SkeeterVacs are pretty easy to set up, so there are no complaints there. Unfortunately, it isn’t all sunshine and rainbows. Both products have a lot of comments online, highlighting problems with their ignition. I’ve also seen a good few complaints about the durability of the SkeeterVacs.

The one year warranty doesn’t seem to be very helpful, with reports online suggesting that the products don’t winter well. Just to explain further, people are claiming the SkeeterVacs arrive and work great during summer. But 12 months later they pull them out, and the ignition won’t start.

Although, these ignition issues are mainly with the newer model, the SV5100. This fact is probably so due to the newer model not being around long enough to find a reliable solution as of yet.  Again, SkeeterVacs tend not to be overly reliable.

If I had to buy one, I’d go with the SV3100. It’s got a lot of positive reviews, and people continue to buy it despite its faults, so it must be doing something right. Fewer people are mentioning the ignition, and I like the price aspect also.

It’s not crazy expensive compared to its competitors, and if you use it correctly, it tends to work (barring mechanical failings, of course!). It’s also got a quick assembly time, and it’s lighter than the SV5100.

I went with the Patriot just because it’s relatively cheap and produced by an established brand. It’s also pretty similar to Blue Rhino’s SkeeterVacs in that it’s cordless. Overall, it’s reliable and a good option for anyone. 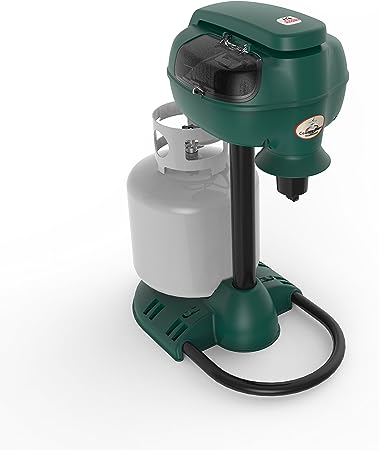 Tackle the mosquitoes, no-see-ums, midges and black flies invading your home or business with the Mosquito Magnet Patriot Plus insect trap. This plug-in powered trap uses a variety of attractants to draw these insects away from people and toward the trap.

I like the Koolatron because it’s pretty much the most minimalistic option you can get. The major downside to the Guardian Pro is that it’s so lightweight and minimalist that it breaks easily.

FAQs About the Blue Rhino SkeeterVac

Yes, they do. Granted, you’ve got to place them strategically. Also, they won’t work miracles. So, to learn the best course of action for you, consult an expert.

Burning propane attracts mosquitoes and other insects by simulating a mammal. When burned, propane releases CO2, moisture, and heat, just like we as humans do. To get the most bang for your buck, you can add an attractant to your SkeeterVac to target a specific species.

What is the Best Mosquito Attractant?

I would say Octenol or R-Octenol. R-Octenol appears superior right now. But, there are also tonnes of new products popping up across the market.

Because this post is all about dealing with mosquitoes outdoors, I thought I’d include this link. It’ll inform you about the top 6 indoor mosquito traps. It’ll also explain what to look for when buying your indoor mosquito unit. Thanks for reading, and keep checking Insect Hobbyist regularly for all your bug related content.