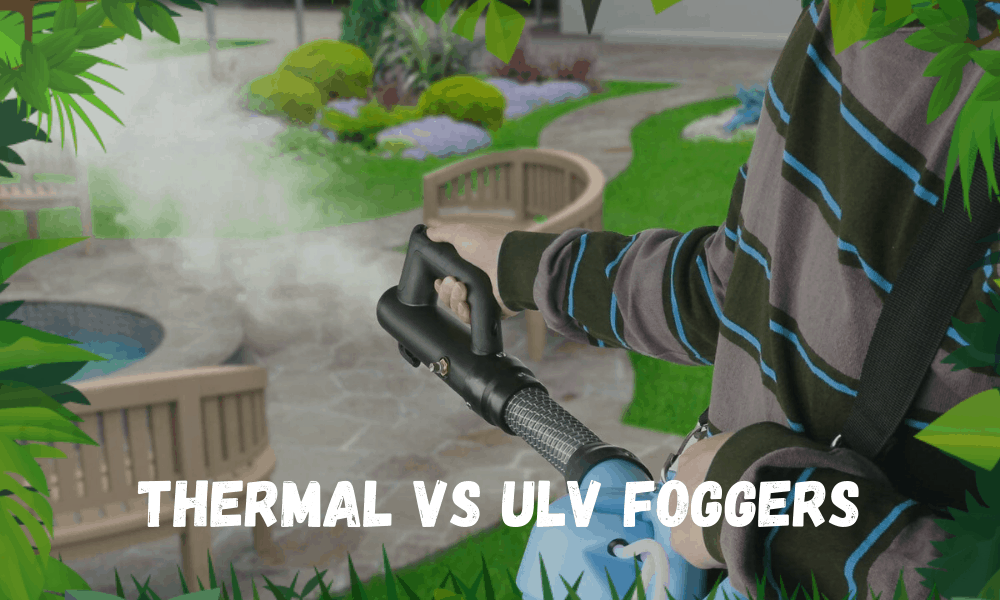 Differences Between Thermal vs ULV Foggers [2020] – Which Is Best?

The electric insect fogger along with other mosquito fogger types of stainless steel are becoming a trend with the rising need for do-it-yourself pest control. For rural, suburban and countryside dwellers who are enjoying a wide backyard, lush gardens and small farms, pests can be an inevitable tradeoff.

For $100.00 to $1000.00 you can get yourself a durable and reliable electric fogger which can serve you different purposes. Most electric foggers nowadays can be used as an insecticide sprayers, deodorizer and sanitizer.

The first step in choosing the best electric fogger is understanding its types and what each variant can offer. This article will help you decide between thermal vs ulv foggers, and you wil find out more about their features and the way they work.

​Also known as (TF) uses heat to convert the insecticide or pesticide into vapor to produce a thick fog that will deliver the substance to a specific range or area. Fog penetrates thick bushes, foliage, trees and shrubs and kills bugs and insects efficiently.

Most thermal foggers have a spray nozzle, a heating chamber and a tank or reservoir. Inside the tank is a pump that carries the chemical to the heating chamber to be converted into mist.

It normally takes the pre-heating process for 2 to 5 minutes. Once it is ready, you can simply unlock the trigger if any, or just pull the trigger. It should produce a misting fox reaching up to 15 feet.

There are different types of thermal foggers too. A propane insect fogger uses gas cylinder attached to the fogging equipment itself. Thermal fuel foggers have a large fuel tank attached on the side of the equipment. The most common for household applications are the thermal electric foggers.

Thermal electric foggers are the fogger of choice of many because of affordability and the duration of use. Since these foggers are directly connected to electricity.  It is suited for long use as long as accessories like extension cords are used for perimeter treatment and long-range areas.

You can get a handheld electric fogger between $75.00 to $500.00 dollars. A gallon of insecticide for mosquitoes starts at $25.

These foggers are obviously the opposite of thermal fogger. Instead of using heat to vaporize the pesticide solution, it uses high-pressure of air to convert the solution into tiny particles.

Cold foggers have an electric motor inside its body. This determines the power of airflow that will convert the pesticide into small particles. The range of the electric motor’s power is from 1 horsepower (HP) or lower, but some might even have more than 1HP.

Most cold foggers are designed for water-based solutions but some may also work using both water and oil-based pesticides. Since most cold foggers run on electricity, it is advisable to have a power outlet near the fogging area or get an extension cord long enough to cover it.

Thermal and ULV foggers have three different styles – handheld, truck-mounted and stationary. Truck-mounted is ideal for big areas, stationary is for a permanent single-area and handheld is best for those who need to cover small and specific areas to concentrate on.

Both thermal and ULV foggers are widely used for different applications but the following comparisons will highlight which type works best for each application:

Almost all thermal foggers are considered flammable and can be a fire risk, therefore, these foggers are for outdoor use only. ULV foggers, on the other hand, can be used indoors and outdoors for pest control, sanitation, odor control, and to get rid of molds such as obiumncubium mold.

It might be helpful to know that the fog produced by thermal and ULV foggers differ in size. Thermal foggers can produce denser fog and droplets as small as 0.5 microns. While ULV foggers, produce uniform droplet sizes and can be adjusted anywhere between 5 to 50 microns which are bigger than thermal’s.

Droplet size affects fogging in several ways. The bigger droplets from ULV foggers are expected to reach a shorter range of 10 feet. Likewise, it cannot be easily controlled because the fog it has produced is not as prominent as that of a thermal fogger.

The denser and smaller droplets of thermal foggers make it easier to use on foliages as it can go through easily. Smaller droplets, however, will be blown away fast when the wind is strong making it hard to control.

Aside from equipping yourself with knowledge on the proper use of each type and its pros and cons, there are other factors you may want to consider before buying. The maintenance procedure, the availability of compatible pesticides, and the price. These are vital information you need to find the best mosquito fogger for your place.

Regardless of your choice between the two, one thing is for sure. Having an electric fogger at home saves you a lot of money from hiring pest control services and insect zappers.

Thermal and ULV foggers are both offered in the market as mosquito foggers on top of its many other functions. Despite the differences, its common denominator is its efficacy in killing mosquitoes like (dengue and chikungunya) and other pests which may be dwelling inside your home or right in your backyard. Now is the time to get one and have a DIY pest control.