Listerine For Mosquitoes: Is it An Effective Bug Spray?

Listerine for mosquitoes? Word on the street has it buzzing about Listerine being your go-to pleasant-smelling mosquito barrier for your next barbeque session, but does a few spritz in the air really keep mosquitoes away? Or is it just another one of those outdoor rumors started by people who are looking for cheaper solutions?

We’re about to find out if Listerine can crawl its way from your bathroom medicine cabinet to your hiking backpack (stay tuned!)

Where Did It All Start?

While it’s virtually impossible to pinpoint a wildfire rumor where it all originated, the chances of it starting in the warmer, wet climates are quite high.There are at least 50 to 100 million people who are directly affected by mosquitoes and the diseases they carry in specific countries that meet the little critters’ ideal temperature.

For those who find the maintenance of mosquito traps a bit too heavy to keep on a regular basis, people got creative and thought of cheaper ways to ward off these tiny, flying demons.

Their unusual ingredients are mostly inspired by day-to-day products we use at home. And for some reason, they found Listerine as one of their top-leading candidates. As a matter of fact, this has reached all ends of the world that even Arnie Mason, a former TV and radio broadcaster has even joined in the hype train. 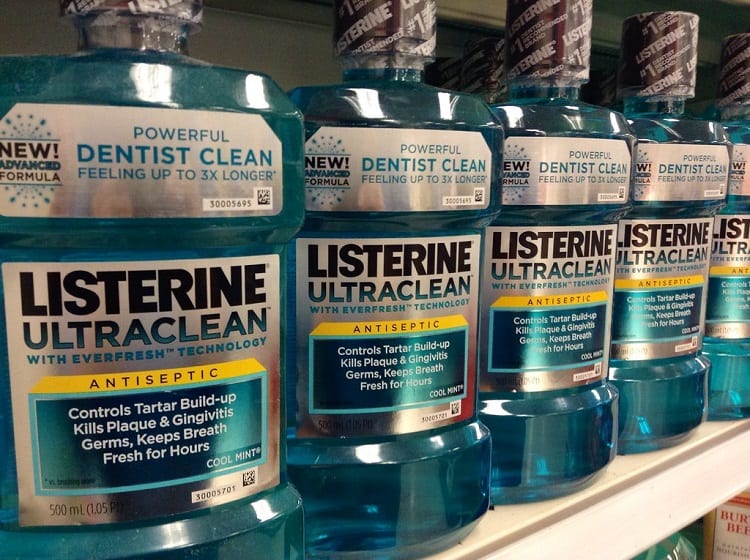 Listerine for Mosquitoes: The “Perfect” Recipe

There are a number of versions for the “Mosquito-Gone Listerine Especial”. For Arnie Mason, his version is completed with 3 basic household ingredients. These are Epsom salts, beer, and of course, Listerine.

Although his intent for his homemade D.I.Y wasn’t meant to be applied to human skin and was more for his bushes, tree, and lawn, he has sworn that the household things he has put together works like a charm for his garden and is “unhealthy for bugs” in an article published by WECT.

On the other side of the spectrum, a lot of peeps are saying that Listerine, combined with Lemon Scented Joy, is the best way to make your homemade anti-mosquito spray.

As what the claim goes, all you have to do is to easily spray it on your body, and it automatically kills them when they’re near. Also, if you mix things up with cayenne pepper, then it’ll eliminate ANY bugs. But if you prefer to keep it simple, you can always just grab your Listerine at home and start spraying it all over your body.

Dissecting The Ingredients: Are The Chemicals Effective Mosquito Repellent?

It’s been bothering me why these people are sticking by this approach as their means of repelling bugs and mosquitoes (aside from the fact that it’s cheap) so I’ve decided to take a look at each of the popular ingredient.

Looking at what Arnie has to say about all this, he may be onto something. Epsom salts are actually well-known by gardeners as fertilizer since it contains magnesium. Note: It’s only effective when used in small amounts!

Beer has also been used by plenty of D.I.Y enthusiasts as a means of repelling bugs and mosquitoes as well – unfortunately, there aren’t enough credible sources on the internet to back this information up.

And finally, we have Listerine. Mason’s case is quite different from the rest (Listerine for plants is a serious no-go as it has high alcohol content) but it’s a fair shot to see what Listerine has to offer for human application.

So, What Makes Listerine Effective For Mosquitoes?

Surprisingly enough, it’s not that only “Listerine” itself is effective against mosquitoes, but it’s what’s in it that actually repels. The main key ingredient is called eucalyptol, and this is not only exclusive to Listerine. It can be found in a number of commercial mouthwashes.

This can be found in botanical repellents as its active ingredient. Also, there are a number of strong studies that show lemon eucalyptus is an effective ​insecticide.

You don’t have to take my word for it, the pros at Centers for Disease Control and Prevention has said it themselves, alongside with DEET and picaridin.

A study done by London School of Hygiene and Tropical Medicine has also proven this fact to be true in their own research (in fact it’s more effective than DEET). The researchers have highlighted it to be extremely effective and safe for human use.

So Um, Listerine for Mosquitoes?

The idea of having Listerine as a mosquito repellent sound like a dream for any homeowner; However, eucalyptol usually has a 75% compound concentration, while Listerine only contains below 1%.

Let’s not forget that Listerine has other ingredients as well, such as water and alcohol. Due to this, it has the tendency of evaporating quickly.

Bottomline: Going for commercial repellents is a much better option than going for the cheap, homemade alternative.

It may repel mosquitoes, but because of the other ingredients, its time of effectivity is cut short. So you’re probably better off getting yourself a legit mosquito repellant, like a propane trap or a fogger.